I kept forgetting to bring the poem with me.

Poem to leave in a shop to be found by an unsuspecting shopper to brighten their day during the stressful Christmas season?


Thankfully I had the best Christmas present and met up with the lovely Various Cushions - IPYPIASM originator extraordinaire - for a coffee yesterday. And she suggested, why didn't I just transcribe the poem there and then and place it in a shop, immediately! 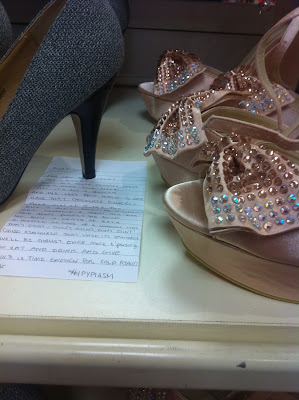 It was more of a before Christmas day poem, but hey, better late than never.

I hashtagged again - for those unfamiliar with the hashtag, it makes your term searchable on Twitter - I've been tweeting about IPYPIASM - and been directing people back to the blogosphere...sure, maybe the cleaning lady is crumbling up my poem without a second thought, but, hey, I know if I found a poem, the curiosity would kill me :)

Anyway, here's the text of the poem - not my finest work, but hey, who cares, it's all part of the IPYPIASM spirit!

For now don't count
the calories
don't tot those pennies spent
just dose your liver
till it's all a quiver
and the last belt notch is rent
have that chocolate Kimberly
that tin of roses too
buy a gift, don't be spendthrift
Get yourself a treat this year!
And don't forget the booze
go buy a crate of beer,
a bottle or nine of a conducive wine
don't stint, don't stint, don't stint!
Cause remember that when it's January
we'll be thrust once more t' penury
so eat and drink and give
2013 is time enough for cold reality.

Deposited in the pound (euro?) shop in The Square, Tallaght, this little ditty -

I won't be troubling the Nobel Prize for Literature this year with that offering, but hopefully it brought a smile to someones face.

And below is the visual evidence of my guerrilla poetry attack.

For, what I suspect, is the first time, we have VIDEO footage of an IPYPIASM incident... In my panic to dump my effort and run, I somehow managed to set my phone to video and not camera. I scrambled madly at it, all the while imagining security guards raising an army, grabbing their mace and batons and being moments away from apprehending me...

(Quite the accidental Spielberg, no?)

It was fraught! I felt like my poem might explode at any moment. Anway, in the end I escaped unscathed and they probably sold my poem for a euro.

On an aside, I was telling my baby brother all about IPYPIASM. After he pretended to think me and my crazeeeee poetry chums were wacky and cool, he suggested adding a hastag to the abandoned poems. Maybe see if any of our messages in a bottle wash up anywhere. So, at the bottom of my print out, where I'd usually just have IPYPIASM, I instead had #IPYPIASM... and I sent a few tweets using it.

I thought it was a good idea - but chances are it'll just get me arrested ;)

And really, this post is a tad premature... I haven't, as yet, put a poem in a shop. The main reason I haven't is because I have failed to write a poem. I have tried a good few times. Nowt.

I worry that along with killing off the h. pylori bacteria that was causing my stomach ulcer, my cocktail of drugs also killed off my writing mojo!! Who knew I kept it in my tummy! Though, seeing as all the best poetry comes from your gut, so maybe I should have realised... 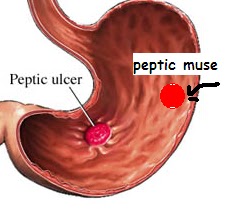 What to do? I suspect I need some l. casei poetritas. Good writing bacteria.

I'm off to the library to drink me in some pro-biographies, some Reader bifidus digestivum, replenish my depleted muse.

Alright, enough, I go before Martine McCutcheon turns up and starts talking shite...
Posted by Tríona at 5:17 PM 3 comments: