The lovely Conor Bredin, host of the Story of a Storyteller podcast, had me on to talk about my writing life, and in particular, being picked twice for the Irish Writers Centre Novel Fair (2015 & 2021)

Here's a link to it

Posted by Tríona at 6:38 PM No comments:

What have I been up to? Quite a bit really... Got picked for the IWC Novel Fair, again - which was nice - and I talk all about it here, in Books Ireland Magazine - 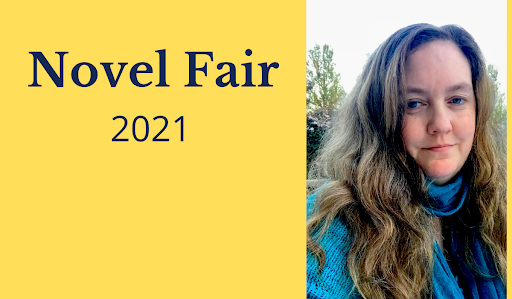 Posted by Tríona at 6:30 PM No comments:

So... I spent the most of the end of 2017 getting sick, and then recovering, then getting sick again. I gained a distinction in my Higher National Diploma in Illustration and a mostly ruined immune system.

But 2018, I am in better shape. And my illustrations plans are on hold as I concentrate on my literary efforts.

2017 was a tough year literary wise. While it was fantastic to win the Molly Keane short Story competition, my novel dreams were dashed. The publisher for my IWC Novel Fair winning novel, went to the big bargain bin in the sky. I had to accept that my life long dream of being published, which had been soooooooooooooooooo close - I had been a mere two months from launch day -  was dead. I won't lie, there were tears.

But you've got to 'And stoop and build 'em up with worn-out tools... and start again at your beginnings, and never breathe a word about your loss', to quote and massacre good old
Rudyard Kipling. I'm not quite not breathing a word about my loss, but you get the idea.

With all this in mind I've been working like a demon on book two. I thought it was ready and decided to fire it into this years IWC Novel Fair. I had such a wonderful experience last time, and it was a great deadline to boot.

It wasn't picked. But it ended up being shortlisted! While initially I was disappointed not to be picked in the top 12 again, I reaslised making the top 24 was a blessing in disguise. I had reviewed the book before the results were announced and realised I wanted to add an extra element. And as happens with adding something extra you get other ideas, create problems and basically I'll be rewriting until the summer! So, if it had been picked as a finalist, it wouldn't be the book it will be come June. And that would have been a waste. BUT, being picked for the shortlist was such a huge confidence boost. As my 15 year old said to me 'It means the first wasn't a fluke!'

So, there we go. I am rewriting book two, and sending book one out to agents and publishers. I am trying not to refresh my email every two seconds. And failing. I'll let you know how I get on.

Probably from a secure unit somewhere...

Being Busy and Molly Keane 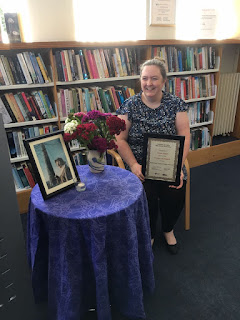 Life has been very busy lately. In May I finished up a three year stint back in college. It was a fantastic experience, but exhausting. I remember when I was 18 and my first college experience, I had all the time in the world. This time, there were four kids, a very understanding husband and a book to be written. All at the same time. So, while it's nearly October now, I still haven't quite recovered! But in the middle of all the stress of final projects, there was a lovely treat when I learned that my short story "Perhaps The Flames" had won the Molly Keane Short Story competition. It was a complete honour. And though I had an acute attack of imposter syndrome - really, me? The winner? Never! - the day down in Lismore where I got to read my story and was present with my prize, was a wonderful experience. Many thanks to the lovely people of Lismore and the Waterford County Council Arts Office.
Posted by Tríona at 4:25 AM 3 comments:


Here at last, by popular demand, the first three "Emer The Emerging Writer" comic strips, all together, in one place! 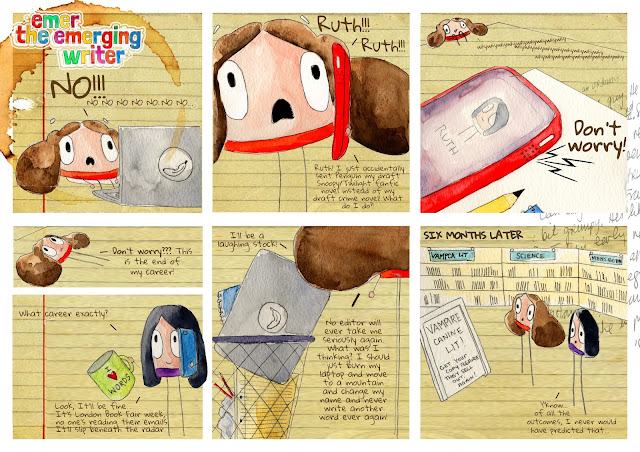 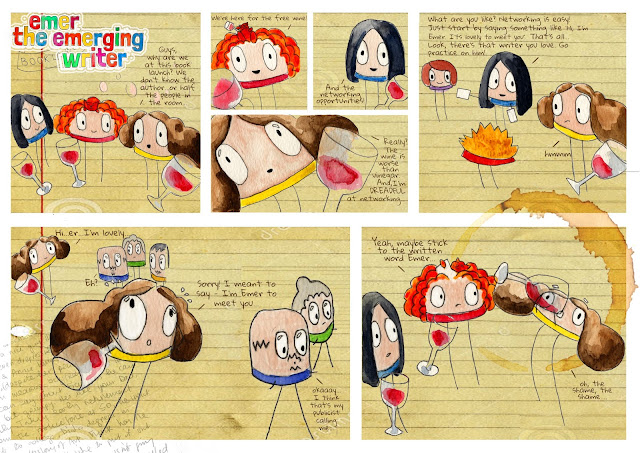 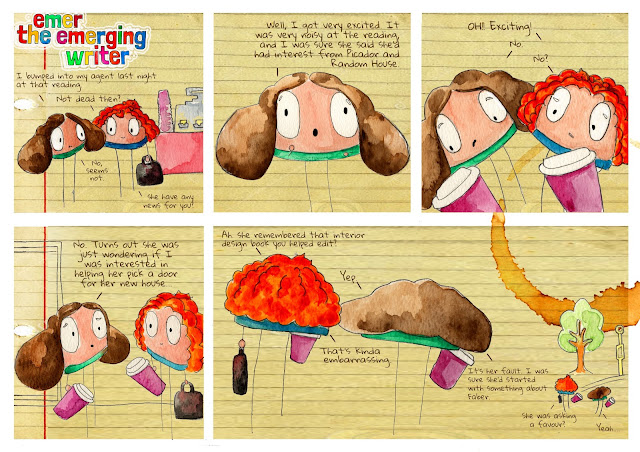 Watch this space for her further adventures :)
Posted by Tríona at 4:01 AM 2 comments:

It's all about making time. That's what they say. If you rally want to write, you've just got to carve out the time. Get up at 6am. Scribble during your lunch break. Etc...etc.

But really, you can't actually make time. It's not possible. There are 24 hours in the day and nothing you do is ever going to change that.

And my 24 hours are very packed. There's college. And the kids. And a house to keep slightly tidy so social services don't visit and take the kids away (though that would free up a lot of time to write...) There is the husband who inexplicably likes to see me occasionally. I have friends. Well, I had friends...I do hope they'll still be there when life is less mad. And sleep. I do like to get more than 2 hours sleep a night. I'm lazy like that.


So, when to write? As I may have mentioned before, I have no college on a Monday, and I get to throw a few words on the page then. But not always. Because sometimes you just have to stop and take a rest. Before your body does that for you involuntarily.

Where else can I carve out some time? When I'm on the loo? When stopped at traffic lights? Don't go to bed one night a week?

Because the alternative is to just not write at all. And that is unthinkable.

While I may only produce a tiny word count of a handful of words a week, at least they are being produced. And maybe I do need to look again at my 24 hours and find the tiny gaps where words could be squeezed in. Just take a big breath in, suck in the guts, and slip those sentences through.

It can be done!

Posted by Tríona at 5:19 AM No comments:

This is a Tad Rambly

The perils of dodgy wi-fi.

I took full advantage of last Novembers inaugural NaWriSoMo - National Write Something Month. I wrote reams! Well, a few bits'n'pieces. So, why has this blog been tumble-weedy? Well, dodgy wi-fi. Never got to upload them. But, you can trust me, the stuff what I wrote, was magic. Gold.

So, what does 2016 hold? Lots of good things are in the offing. I can feel it in my bones. I just need to get college finished. Then it's back to full time writing. I'm really missing my writing time. Monday mornings, until about lunchtime is the only space in my week for writing. It's too little. I want to - in fact need to - immerse myself in my fictional worlds. If I don't, well, the writing isn't what it could be. And that just isn't good enough.

Right, this is a tad rambly. I can't imagine this post is going to inspire anyone in paticular. But it has served two purposes - a) I'm back online and b) It's put off that difficult moment where I have to actually put words on paper of my new novel. It's a bloody mountain. But, I guess as the saying goes, the longest journey starts with the first step. I guess I better set out then...

So, until I'm back, here are some pieces of art I have been doing in college, which has been keeping me from my writing! 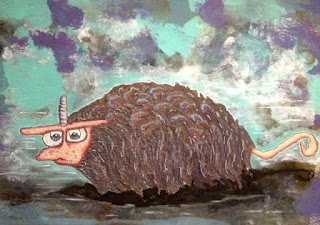 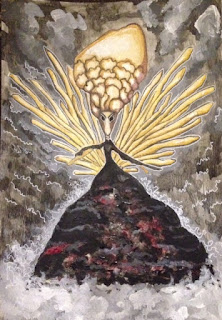 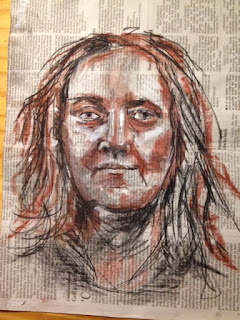 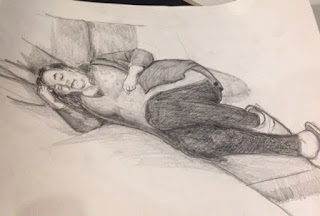 Okay, till next time!
Posted by Tríona at 4:03 AM No comments: